Sydneysiders: Do you recognise the same beach in the second photo?

It depicts a key scene in Charles Chauvel’s award-winning 1935 film “Heritage”. The peaceful, uninhabited cove at Great Mackarel Beach was used to depict the first settlement at Sydney Cove in the early days of the colony. Discover More…

I have never been to Great Mackarel Beach at Pittwater but I believe it is still reached chiefly by boat. I would love to hear from someone who lives there and recognises the setting. 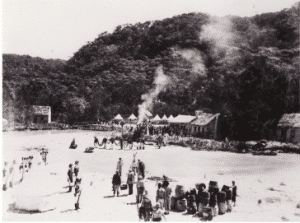