Currans Hill today is deemed a suburb of Camden. In 1942 it was a bare hill surrounded by farmland. Chauvel found it the perfect location for his ‘town’ of Tobruk, a portion of which was reconstructed on the hill according to official war photographs.

“There were unexpected diversions for farmers in the Narellan district, early in 1944. On Currans Hill, normaly a quiet, rural location, war suddenly and noisily erupted. Bewildered residents watched as the Hill was invaded by truckloads of equipment and people – some in uniform with weapons, others with cameras.

A sealed road was laid. On either side of it carpenters erected white-painted buildings and what appeared to be ruins of a church. Why erect something already ruined? When the ghostly structures were complete, a fierce storm blew the set down, the day before it was needed. It was patiently repaired, before bren-gun carriers rolled in and soldiers poured into town. From the sky, planes bearing the dreaded enemy swastika swooped low to bomb everything the carpenters had completed. Locals no doubt thought the whole operation was lunatic. Complaints were received from nearby farmers that the noise had affected the laying of hens and three cows had gone off milk.” 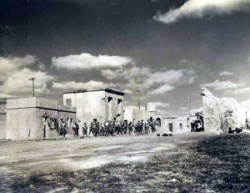 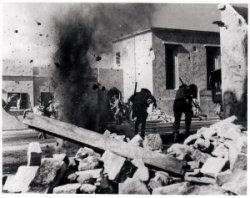